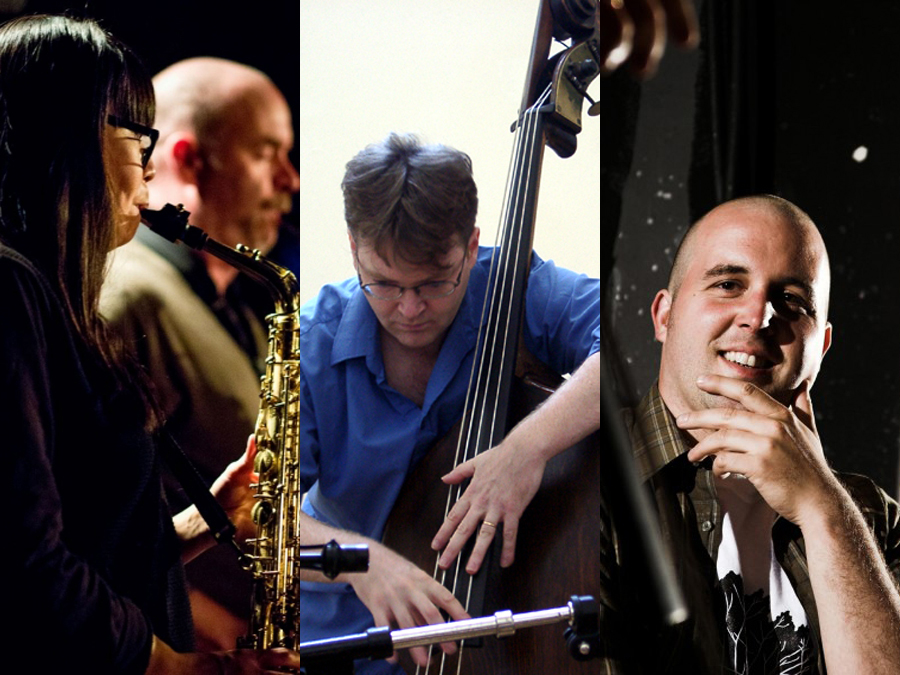 Marilyn Lerner, Karen Ng, Nick Fraser, Rob Clutton, Pete Johnson and Nick Storring are all part of a burgeoning group of free-thinking musicians who – despite the respect of their peers in Canada and the USA – are largely unsupported by the substructure that holds up the Canadian avant-garde. Much of this has to do with facile taste of “here today, gone tomorrow”, promoted to excess by the ease of the “shuffle” feature of digital devices and the digital media  that enables it; and thanks to nature of fashion and that ephemeral thing called “pop-culture” [formerly known as “social studies”, which continues to be a part of history]. Not surprisingly many so-called “influential” writers in modern media, sadly lacking in knowledge of the aforementioned department, have forgotten that saveur du jour refers to soup and not to social mores and therefore culture and art. We seem to be constantly living in a post-apocalyptic state; something that the ineffably prodigious playwright Eugene O’Neill prophetically referred to in The Iceman Cometh as: “the kick has gone out of the booze”.

Thank heavens for small mercies such as the Canada Council for the Arts, the Ontario Arts Council, and FACTOR each, a boon companion to the Canadian artist today. And then there is the whole business of funding. All of this has enabled the artist to remain independent of the proverbially ignorance of most record label executives and an overall industry that has continued to favour profit over artistic expression. There is also a venue in Toronto such as the Tranzac Club [and others like it elsewhere in Canada] that has stoically supported free-thinking musicians who have pushed the envelope, for it is here that musicians such as these have work-shopped their music to small, highly appreciative audiences.

Let’s not forget the small, independent label [one of which is All-Set!], which has released one of the recordings under review here… So here, for enduring listening pleasure is music by a few of the musicians who, after Eric Dolphy, may be referred to as “outward bounding”. The music, composed by bassist Pete Johnson and played by the quartet called See Through 4 is exquisitely translucent, is often refracted through shattered glass, and is created with evocative prosody, sinister, yet riveting imagery or which The Sidewalks Are Watching is characteristic. It is the first of two recordings that features the drumming colourist Nick Fraser and the nervy saxophonist and musical explorer, Karen Ng.

First of all Mr Johnson’s music in the hands of a time-keeper who plays in time, outside time and around time, with extraordinarily dexterous hands wielding brushes and sticks finds itself not only brilliantly anchored, but rhythmically propelled in wonderful arcs and ellipses, that create whorls of energetic music adorned by Marilyn Lerner flighty excursions and Karen Ng’s profound horn lines. Mr Johnson’s bass lines add enormous gravitas to this music; and all of this together seduces the inner ear with such allure that you will [as I was] riveted to it right out of the gate with Another Word For Science unto the profundity of its dénouement on An Ocean To Forget.

Track list – 1: Another Word For Science; 2: Battling In Extra Ends; 3: With Scars To Show; 4: The Sidewalks Are Watching; 5: Uncertain Slant Of Light; 6: Not A Half Stepper; 7: An Ocean To Forget’

Sonic paintings created by the adventurous contrabassist Rob Clutton are featured on the trio recording painting entitled Counsel of Primaries. The visual metaphor evoked by the title of this recording is kicked off with the magnificent surge of Nick Fraser’s tuned-drumming the kind of which was once a show-stopping feature of the incomparable Eddie Moore’s drumming [with a musical saw]. Sterling beckons us with the hypnotic interweaving of the seemingly interminable lines of Karen Ng’s saxophone, held aloft by seemingly endless notes pierced by Mr Clutton’s contrabasse played con arco, the lines of which are punctuated and broken up with the jabbering of Mr Fraser’s drums.

All of this leads into the mad stutter of Counsel Of Primaries, evocative of a canvas on which the colours and textures daubed by the musicians is always wet and viscous; the colours melting into one another seeming to create new and always unexpectedly absorbing images. Mr Clutton’s music has a gloriously elusive character to it, composed as it is seemingly with nerve-endings rather than a pencil on paper. But what is most absorbing about this recording is that it seems to speak to the musicians in a secret, copacetic manner. Having interiorized its inner meaning and metaphor Miss Ng and Mr Fraser are able to give it wings.

Nick Storring · My Magic Dreams Have Lost Their Spell

No matter how many layers of sound have been dubbed onto a tape playing solo will always remain the loneliest pursuit of a musician. Nick Storring is not one to shy away from that fact and has fearlessly dived right into secret realms of the consciousness that trigger not only music but the senses and emotions of which it is made. On this adventurous recording Mr Storring uses all of his faculties – triggered by his special kind of multi-instrumentalism to explore the most mysterious parts of the human mind.

The music that results is driven by and revels in the unexpected. To give wing to the impulse and capture it in its own nascent and glorious ephemera Mr Storring resorts to multiple layers of sound made by a breathtaking array of instruments, all of which are rather expertly played [or manipulated] to produce an absorbing record of the dream-state. Contiguous with the manner in which dreams have a way of holding onto – and abruptly releasing – neural synapses the music whispers, grinds and sometimes roars on. Comprised of composed and improvised parts this is the kind of dream that everyone may have had at some time or other in life. But being the kind of artist who is agape at the immensity of dreamscapes Mr Storring has captured his own sojourn with all of its foibles – be they comedic or tragic – with uncommon stoicism and artistry and humanity.

Track list – Side A – 1: Tides That Defeat Identity; 2: Pretending You And I; 3: Tonight There’ll Be No Distance Between Us; Side B – 4: What A Made-Up Mind Can Do; 5: Now Neither One Of Us Is Breaking; 6: My Magic Dreams Have Lost Their Spell