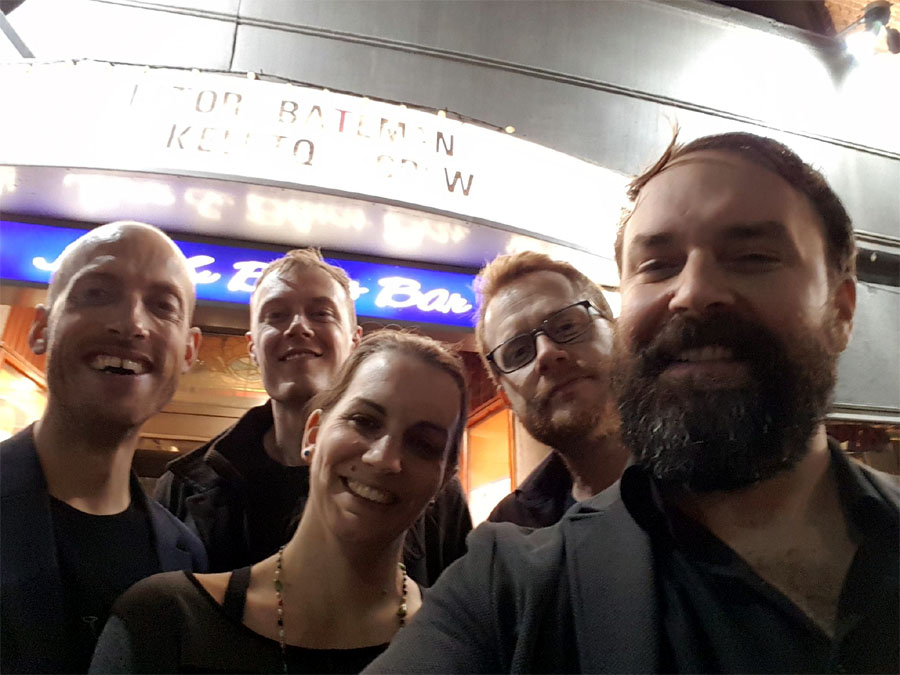 Gord Mowat and his Skeleton Crew

The reference to a “skeleton crew” can never be lost on anyone who’s ever worked the graveyard shift in a metropolis that never sleeps. It’s a metaphor; one that conjures up visions of a few people doing good paying work late at night under challenging and perhaps exhausting circumstances; a decidedly sleep-depriving enterprise and something that can play havoc with the body’s metabolism. In the pursuit of making music, the “skeleton crew” metaphor – this, Gord Mowat’s Skeleton Crew precisely – might come with a generous dose of sardonicism perhaps, and the notion of non-paying gigs or gigs-for-door-money on top of playing for audiences of mostly small groups of friends… and that too, after-hours, which please note.

The job of being a creative composer and improvising musician is a relatively thankless job more so if you are your music-making is competing for share-of-voice in a relatively (to contemporary music, at least) apathetic media in sports-crazy – hockey and now basketball too – Toronto. This is despite successive governments in Canada being generous to the liberal arts (unlike the USA). This doesn’t mean that Gord Mowat is likely to be covered in mainstream media, let alone be given a fair shake, when even older musicians have to “pitch” their music to (the media). That’s a pity. Mr Mowat is a fine virtuoso bassist – and who appears to be a composer certainly subscribes to the dogma that the true test of form is continuity of interest. As for me, there’s not a dull moment anywhere on this disc.

The Skeleton Crew’s virtuosity is also of the highest order, with Mr Mowat quietly throwing off the contrabass fireworks on diabolically challenging pieces such as “Mitosis and Meiosis” and “Spinnaker” with superb élan. Balance between the brass and winds – comprising three superb musicians; trumpeter Rebecca Hennessy, tenor saxophonist Chris Gale and trombonist Tom Richards – neither of whom overpowers the other in solo or ensemble through the six mind-bending works that comprise the repertoire on this recording. Counterpoint is challenging. Dissonance is always interestingly used. Improvisation is riveting and is interwoven into composition, which – in turn – demands your attention.

“It All Turned into Rock ‘n’ Roll” is a fabulous work – spiced with humour and a generous dose of irony. It is a work that remains interesting from start to finish. The song really catches the attention after a chain of tiny gestural phrases, a single insistent pulsing pitch pools into a flood of glorious tone created by the wind and brass as the Mr Mowat’s growling bass and quietly elegant drumming by Jeff Halischuck glues everything together. The effect is extraordinary. In its finale the music receives the tenderest of caresses by a fulsome ensemble seemingly completely at odds with its given name (at least) on this recording: the “Skeleton Crew”.