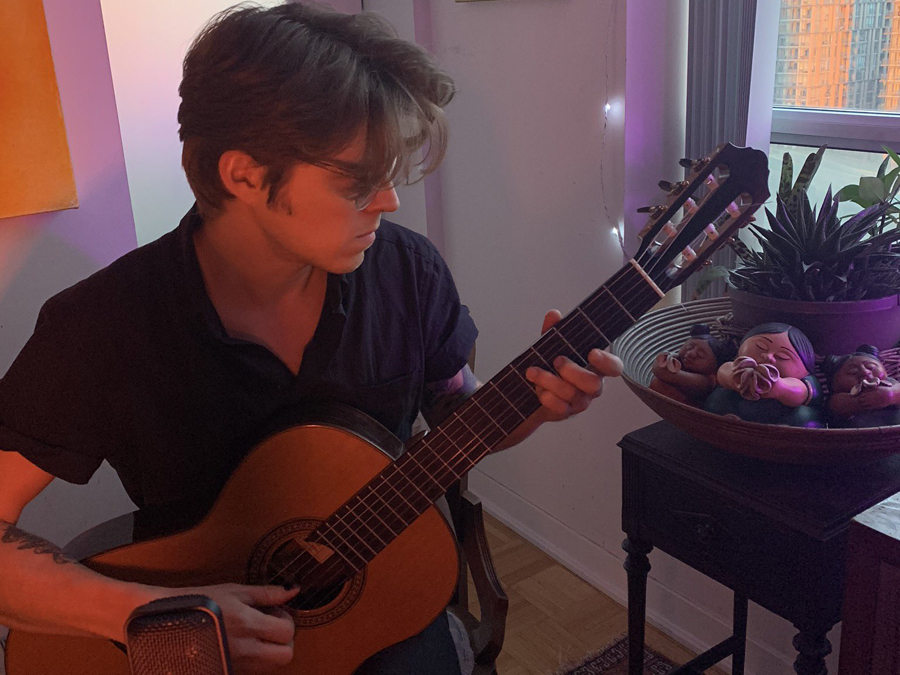 The young Toronto musician – something of a multi-instrumentalist at that – and prodigiously-gifted guitarist, Liam Jaeger could be anything he chooses to be in music. His smoky, whispering, somewhat off-centre tenor makes him a rather fine vocalist in the mould of João Gilberto and his formidable technical prowess, stamina, accuracy, power and boldness makes him a breathtaking guitarist. He brings all of these extraordinary abilities to bear on his poignant debut album entitled Daydream Ache, a sleeper released in early 2020, but which has been lurking in the shadows of the pandemic ever since.

*Bandcamp Fridays return in 2022, on February 4th, March 4th, April 1st, and May 6th. Bandcamp is waiving its revenue share for all sales so the artists make more money. Support Liam Jaeger buying his music in any of those days.

Mr Jaeger has been active on the music circuit both in Canada, the rest of North America and Europe. He’s known for albums and constant touring with The Balconies (2008-2018), and recent work on Pernice Brothers’ album ​Spread the Feeling​. [He also performs regularly with Taylor Knox, The Cola Heads, Jacquie Neville, Danielle Duval and others]. And he’s also been doubling as a producer and engineer when called for. This debut album is a timely reminder not only of his vocal skills but also a pertinent suggestion that he could have a career as a vocalist, classical guitarist or a multi-instrumentalist – indeed, all or any of the above.

As a guitarist – a classical guitarist really – his tonal sheen, wide dynamic range, ear for nuance and pinpoint technique make a compelling case for that creative path. Mr Jaeger showcases this on two superb songs each of which requires diametrically opposite approaches to the instrument, yet serious technique. “Cavatina” is one of the most beautiful melodies ever written for the instrument that calls for almost glassy glissandi and a feathery touch with fingers caressing, rather than plucking the strings throughout, not to mention abrupt changes making for expressions dynamically suited emotional changes relating to the song’s major/minor/augmented [chord] changes.

The other song is Leo Brouwer’s magnificent “Elogio de la Danza”, which is diabolically challenging even as Brouwer compositions go. This one calls for gaunt sonority, laser-like projection, finely calibrated articulation and uncanny rhythmic equilibrium – all conveyed with blinding clarity and intense concentration by Mr Jaeger throughout. It is, indeed the apogee of this album.

The first three songs on the album have the effect of breathy vocalastics evocative of Mr Gilberto, sung with inimitable élan, and melodic and harmonic imagination as well. Tom Jobim’s “Corcovado” features Gene Lees’ lyrics, and the composer’s classic “The Girl from Ipanema” is voiced with great warmth and dreamy evocativeness. The sheer and spare beauty of Mr Jaeger’s interpretation of the Jacques Prevert’s poetic “Les Feuilles Mortes” is a standout work.

The album closes with two originals by Mr Jaeger… and wouldn’t you know it, there are more than a myriad dimensions to his prismatic musicianship. The bonus track makes for a lively, climactic finale to this eloquent album.

Wheel It Studios Vol 3: Ride it Out