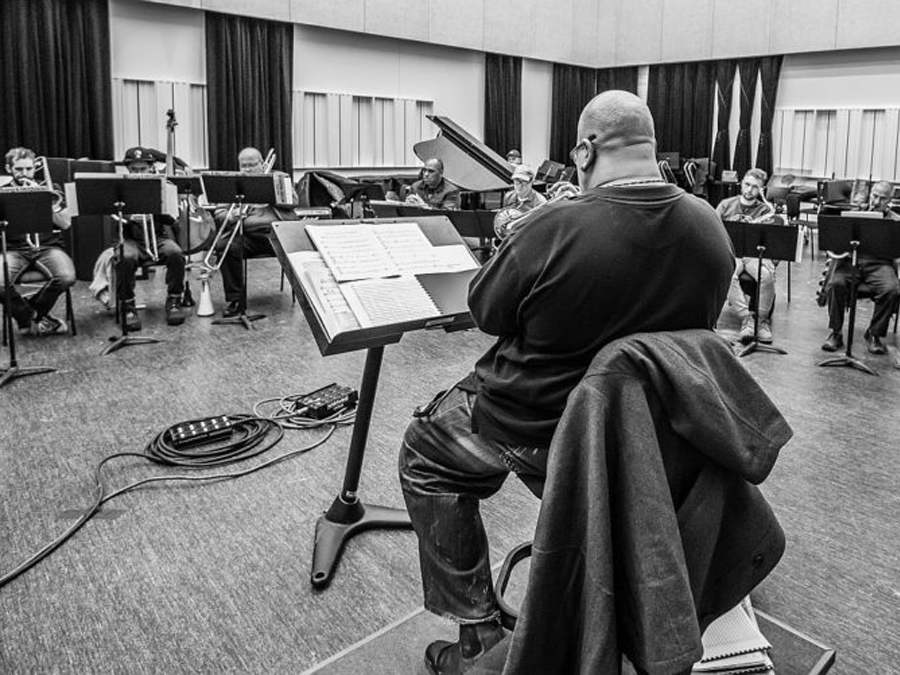 Even without the pandemic it seemed that the Jazz big band was destined for demise – what with the paucity of funds to sustain the employment of good musicianship and the shuttering of venues that could not only be sympathetic to large ensembles, but have the facilities where their performances might be sustained. Moreover, most of the high-end performance spaces “belong to” or almost always appear to me inclined to support symphonic and philharmonic orchestras; not only on the American continent, but in Europe, Africa and the rest of the world too. However, there is the fact that universities have become the new conservatoires and that crowd-funding has helped keep them going… together with governments with unstinting support for the arts – governments like the successive ones in Canada, for instance.

Thanks to one such pool of support – the University of Manitoba, Canada Council for the Arts and FACTOR Canada we have this brand new and brilliant big band document – Still I Rise, performed by the venerable Derrick Gardner & the Big dig! Band. This large ensemble comprises top tier musicians from both Canada and the USA and is fronted by the celebrated trumpeter, Derrick Gardner who heads the Desautels Faculty of Music at the University of Manitoba. It must be mentioned here that Manitoba is also home to the quite extraordinary Manitoba Chamber Orchestra conducted by Anne Munson and has recorded wonderful performances in their own right – such as Troubadour & the Nightingale with the soprano Isabel Bayrakdarian as well as Mirage? Concertos for Percussion featuring the great mallet percussionist Dame Evelyn Glennie. And the reason for mentioning this is of course that – lest there be any misunderstanding – Toronto is not the only place where art thrives in Canada… nor are we shy of bringing such major Jazz figures as Derrick Gardner to drive the music in The North either.

But enough Canadian chest-beating for a moment; the Derrick Gardner Big! Dig Band is a sensational outfit. It has to be. After all it is fronted by a formidable figure – albeit not so well known outside the inner circle of Jazz musicians – Mr Gardner, who has credentials that rival many a musician inside and outside the US. He has distinguished himself in the Count Basie Orchestra, has been referred to as “the heir apparent to Frank Foster” in that band and is, of course, also brother to trombonist Vincent Gardner, who brings sparkle to the brass section of the Jazz at Lincoln Center Orchestra with Wynton Marsalis. Biodata apart, Mr Gardner is a phenomenal trumpeter and an even more accomplished composer and arranger and these qualities shine through all over the music of Still I Rise, an album that is evocative of anger and despair, hope and love. What sets Mr Gardner’s compositions and arrangements apart from anything that you might expect to listen to in a big band setting is not merely the fact that they swing [“Push Come da Shove”], or include intellectual application of contrafacts [“8 Ball”, “Side Pocket”], but that they do so eloquently and authentically hark to these, the most classic and revered elements of Jazz.

Mr Gardner himself directs this big band in the grand manner, recalling not so much his stint as an alumnus of the Count Basie Orchestra, but more in one recalling the great Thad Jones’ direction of that great big band, The Thad Jones-Mel Lewis Big Band. As a virtuoso instrumentalist Mr Gardner also embodies Charles Mingus’ poetic epithet with which he once described Mr Jones: “Bartók with valves” and this is borne out over Mr Gardner’s many soli in this repertoire, markedly so on Still I Rise and Blues for Burgess, the latter, an elegiac offering in memory of his father Burgess Gardner. Mr Gardner has set the members of his ensemble free to express themselves, and they have repaid his confidence in them by infusing the melodies with exquisite and moving cadenzas on their respective themes. Vincent Gardner is sublime on “Melody for Trayvon” [as are Curtis Taylor on trumpet, Mark Gross on alto and Rob Dixon on tenor saxophones], Curtis Nowosad is masterful on “Soulful Brother Gelispie”; Kasey Kurtz is also poignant on this chart. Tristan Martinuson follows Mr Gardner’s solo with his own elegant one on tenor saxophone and Zed Zadravec plays with extraordinary charisma on “8 Ball” and “Side Pocket”.

To my mind, however, the most exciting moments come at the end of the album, on “Heavens for Murgatroyd!”. This is a perfect example of writing by one who is unafraid to push a swinging exposition of a big band chart to the limit. Mixing metaphors, traversing Jazz history and pulling out the stops to “give it all you’ve got” and having outright fun while doing so – not to mention the addition of the grooving rhythms of the turntableist, DJ Stop – all conspire to make this chart a truly inspired one. Too often big band music is predictable and formulaic in terms of melody, harmonisations and time and this has led to the charts becoming rather stilted. But in “Heavens for Murgatroyd!”, we have a chart that breaks through the morass to be couched in a delightfully whimsical title and take our collective breaths away. Bravo Derrick Gardner & the Big dig! Band.