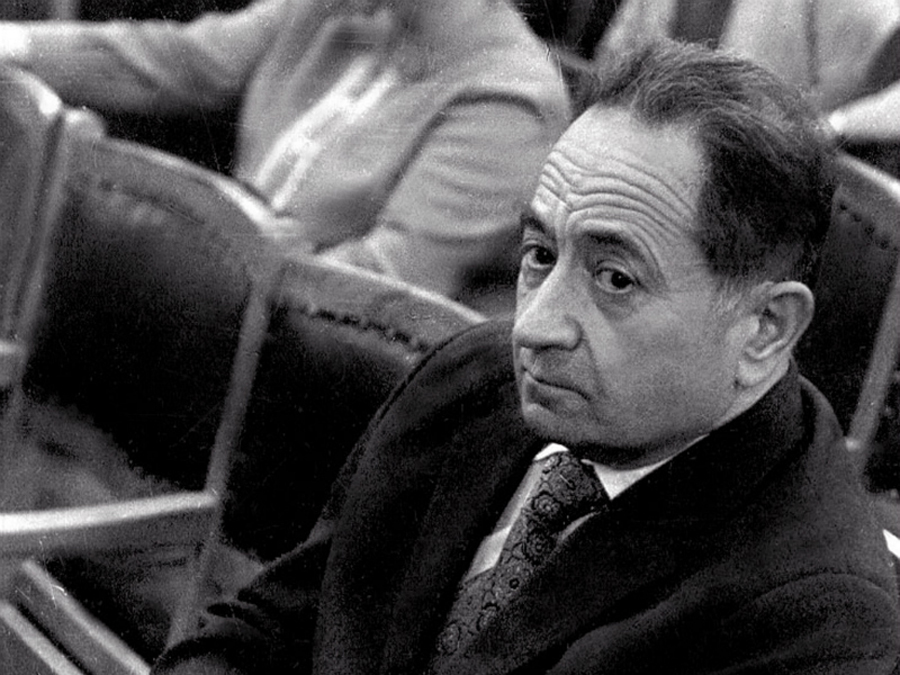 As the terrible events of Russia’s persecution and invasion of Ukraine unfold, the destruction that has befallen Kharkiv, must surely call to mind – both tragically and triumphantly – while the name of the incomparable Dimitri Klebanov remains a beacon of light for that city. In these heartbreaking times it is fortuitous indeed that Mr Klebanov’s Chamber Works, which received their premier recording as part of the series Music in Exile curated by Simon Wynberg, and performed by the Toronto’s ARC Ensemble of which Mr Wynberg is Artistic Director. Moreover the recording of this extraordinary performance has also been nominated for a Juno Award in the category of Classical Album of the Year [Small Ensemble] | Album classique de l’année [petit ensemble].

A native son of Kharkiv, Ukraine, Dimitri Klebanov is one of the most iconic composers of his country not to have been fully recognised, despite his standing, due to a series of curious and tragic circumstances. To begin at the beginning: Mr Klebanov  received his start in that city as a prodigious six-year-old violinist who grew into one of the country’s premier composers – an peripatetic and incurable innovator – who was later celebrated [albeit briefly] by the Soviets. Tragically much of what Mr Klebanov wrote never saw the light of day and yet his reputation as one of the leading musicians and pedagogues of in post-war Europe.

Mr Klebanov was also one of the leading violists in the erstwhile Soviet Union and spent time as a violist with the Leningrad Opera Orchestra, working with a stellar cast of conductors including Bruno Walter, Otto Klemperer, Erich Kleiber and Albert Coates. In the early part of his career he was involved in some of the seminal performances of western classical music in Soviet-era Russia. Wozzeck the first opera by Alban Berg, was one of them – probably the highlight of Mr Klebanov’s nascent career. The performance was conducted by Vladimir Dranishnikov in the Mariinsky Theatre, and attended by Dimitri Shostakovich.

But what could easily have been one of the most celebrated careers in the then-Soviet Union faltered twice: during the 1930’s Mr Klebanov’s Ukraine also suffered severely under Josef Stalin during the latter’s infamous dictatorship, climaxing in the heinous mass-shooting of independent-minded intelligentsia. A total of 30,000 men and women were “purged”. In 1941, Hitler’s rampaging National Socialism swept across the continent and the Wehrmacht armies – launching “Operation Barbarossa” invaded Ukraine en route to the Soviet Union. Mr Klebanov fled to during World War II. This exile meant spending a large part of his life in Russia.

Mr Klebanov was one of the many artists who fled to Uzbekistan, joining a group of remarkable artists which included the Polish composer Mieczyslaw Weinberg, actor Solomon Mikhoeis, the writer Nadezhda Mandelstam [wife of the inimitable poet Osip Mendelstam] and the great poet Anna Akhmatova. Hunkered down in Tashkent, Mr Klebanov taught music and composed for theatre and film. He co-wrote the score for the prescient documentary Battle for our Soviet Ukraine with another Ukrainian Andry Shtoharenko. This unusual rehabilitation-in-exile led to Mr Klebanov’s ultimate return to Ukraine.

Towards the end of 1943, The Soviets recaptured Ukraine and drove Hitler’s forces out of the country. Mr Klebanov was reinstated a public capacity and proceeded to write his first symphony dedicating it [Mr Wynberg’s wonderfully detailed booklet notes tell us] ‘to the memory of the martyrs of Babi Yar’, the infamous ravine where, over the course of two days late in 1941, nearly 30,000 Jews were massacred by the Nazis. This symphony was premiered in Kharkiv in 1947 “as part of an all-Klebanov concert that included his First Violin Concerto and the Welcome Overture.

“The enthusiastic reception,” continues Mr Wynberg, “led to further performances, in both Kharkiv and Kyiv, but problems surfaced in 1949, when it was submitted for the Stalin Prize.” These so-called “problems” had everything to do with the fact that the events commemorated were a Jewish genocide and not the commemoration of Soviet casualties during that war. It appeared that the objection was due to the fact [or so it was claimed] that the melodies and lamentations were rooted in Jewish folk sources and sacred canticles. Thus Mr Klebanov’s music was then condemned as “insolent” and “unpatriotic”. Sovietisation effectively buried this major work and although Mr Klebanov’s reputation was rehabilitated under Nikita Khrushchev, the composer’s epic work was never performed in his lifetime.

However, true to the tenets of Music in Exile, Mr Wynberg and the ARC Ensemble have, once again, set the ball rolling on what could be the rediscovery of another major composer whose work might have been lost entirely due to the vicissitudes of political instability in Europe between the 1930’s and the 1980’s through to today [yes, today, even in a free Ukraine]. And then there is the fact of Dimitri Klebanov’s Hebraic background, something that began with his exodus to Uzbekistan and later the suppression of his brilliant work by the Soviets under the dictator, Josef Stalin.

These Chamber Works – certainly the String Quartet No. 5, but also [remarkably] both the String Quartet No. 4 and the Trio No. 2 for piano, violin and cello – while they do not show Dimitri Klebanov to be an iconoclast, they do suggest that the composer also had a healthy disregard for mining the depths of tradition, despite staying true to traditional “songfullness”. But listening to all of this work, it is clear that Mr Klebanov seems to say that “tradition is a wonderful reality” but “not understanding that the inner dynamic of tradition is always to innovate, can be a prison”.

And so Mr Klebanov has chiselled his uniquely beautiful body, but defiantly provocative, body of work from out of the bedrock of the Ukrainian-Russian tradition. But while that might imply pastiche of archetypal classical and romantic models, such as the trio and quartets [and the symphony]; instead the composer uses these very forms while forcing the listener to reconsider what tradition really is. For instance he positions himself in creative conflict with age-old protocols about how these trios and quartets “ought” to work.

By actively throwing overboard melodic, structural and harmonic hooks that have become expressively blunted through overuse, he builds on what might – or might not – be left. As a result you will hear what you may know as The Carol of the Bells built into a more dramatic scenario in the Allegro section of the first movement of String Quartet No. 4, which begins with a graceful Allegro moderato, then sees the players jousting together in allegro before concluding in a Poco suostenuto tempo. The follows the second movement which in which the tension and emotion is highlighted by dramatic changes in tempi and mood – an unique characteristic of Mr Klebanov’s singular compositional style.

We get a firsthand look at how traditional views of beauty fit into Mr Klebanov’s perception. While being very central to the composer’s credo, he seems to argue – in the Trio No 2 – that there is a distinction between the overly perfumed, audience-ingratiating beauty typical of commercial music – and the authentic beauty that comes from approximating the purest tone of the instruments [employed] in his music. This is not easy to nail, but the ARC Ensemble performs this [and the rest of the repertoire as if they have attuned their inner ears – like Mr Klebanov himself does – to move off the radar of conventional instrumental timbre. Thus the Arc unerringly zone into Mr Klebanov’s intentions, realising his ideas faithfully.

The music – including Quartet No. 5 – seems to speak in a very special way to the members of the Arc Ensemble. For their part they navigate the composer’s elemental sound world in order to bring to life its eloquent beauty.  This gives us premiere recordings which are vivid and dramatic on a recording that brings both characteristics of the music to life in the warmth of an exquisitely engineered recording which is, perhaps the finest in this Music in Exile series; a recording to absolutely die for…