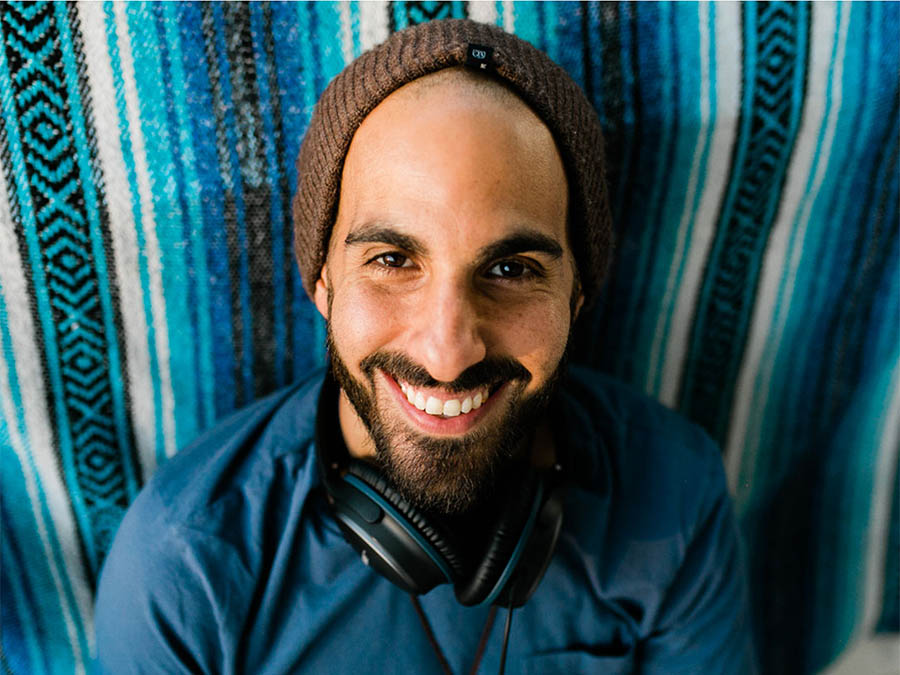 Meet Chris Assaad, a talented singer, songwriter and well-rounded musician. I first became aware of Chris a couple of months back at an event in rural Ontario. Hearing his laid back, soulful vocal delivery, a blend of folk, soul and roots reggae, he performed deep meaningful songs that awoken something in me. His beautiful songs stirred my emotions and they opened my heart.

Paul J Youngman: The last couple of years have been eye opening and many people found themselves stepping outside of their normal comfort zones. Did you have any epiphanies? Any what if moments?

Chris Assaad: There were definitely many lessons learned and epiphanies during these last couple of years. One of the biggest ones came the first time I shared music in a live setting, after not having done so for over two years.

I was sharing with the community in attendance just how much I missed being together and most of all, hearing the sound of all of our voices singing together. That’s always been one of the things that nourishes me most.

I was truly moved by the realization of just how important those moments of oneness and connection are, and how much they mean to me.

Paul: Are you from a musical family? When did you start on a musical path?

Chris: I am actually the first person in my immediate family who took up music. Apart from piano lessons, at a young age, that didn’t really spark my connection to music at all, and more so, turned me away from it.

I didn’t really start getting into music until I was in my early 20’s. I was in University and started going to concerts  and live shows for the first time in my life. I became so inspired by the bands and artists I was discovering that I decided to start learning guitar and then, eventually, singing too.

The start of my musical journey was also greatly intensified by the fact that I experienced a sudden and rapid loss of my hearing, right around that time, just as I was beginning to learn how to play.

I discovered I had a hereditary condition that came on early and fast. Thankfully, I found a doctor who was able to help and before long, my hearing was back to nearly normal and my fire for music was further ignited. It was a challenging and confronting experience but also a really powerful initiation into my choice to commit to the path of my artistry.

Around that same time, a close cousin of mine who had been playing and singing for a few years showed me some things to help me progress. And before long, we started having regular jams, writing songs together and eventually we put together our own original music band.

Paul: What or who, are some of your biggest musical influences?

Chris: I’ve always naturally gravitated to music that is deeply soulful. I didn’t realize it until later but many of the artists that I have always loved and been most inspired by made music as a form of prayer and with a spiritual, devotional intention.

This is the essence of reggae music, classic soul, R&B and gospel music. Artists such as Bob Marley, Bill Withers and Ben Harper, these were some of my earliest musical heroes. They all embody that. Their music has that medicinal quality to it.

In a similar sense, I’ve always approached music as a practice for my own healing and nourishment, first and foremost, and as an offering to support others on their journey. That has continued to inform my writing and the direction of my sound as an artist.

Paul: When I first heard your music, at the New Earth Festival, I sensed a commitment to wellness. Your songs seem to nourish a mind, body and spirit kind of flavour. Am I correct? And where does that come from?

My artist journey and my spiritual journey have always been deeply interwoven. From very early on in my music making and songwriting, I instinctively felt called to embed the wisdom, lessons and insights I was receiving on my path into my songs as a way of absorbing and integrating them deeper into my consciousness. And then, with the possibility and opportunity to contribute by sharing that harvested treasure with others.

Over time, I also discovered that using my voice is a powerful way to move and transmute stuck energy and emotion, and to process some of life’s challenges and difficult experiences. That alchemy and the willingness to bring my pain into my practice has definitely been a source of great inspiration and led to many songs being born.

And last but not least, I do believe that laughter and lightness are some of the best medicine and one of my favourite ways to create is to improvise, freestyle and just make stuff up, on the spot.

Allowing my silly side to come out and to have a voice in my musical expression has also been tremendously fulfilling. This has also led to some special creations coming through in the most unexpected ways.

Paul: What kind of future projects do you have planned and let the folks know how to connect with you and check out some live gigs.

Chris: I’m just about to release my fourth studio album, GOLDEN, on November 18th, 2022. I recorded it in BC with my dear brother, collaborator and producer, Joby Baker (Deva Premal, Alex Cuba, Wailin’ Jennys).

It’s definitely my most raw and vulnerable work to date and I’m excited to share it and have it out in the world. Especially at this time when music made with love is so needed. It’s also an evolution sonically and stylistically from previous records and I’m proud of what we created.

We’ll be doing a special album launch celebration in Toronto on Dec. 2nd at Annette’s studio, an intimate and cozy studio space that used to be an old chapel which has a real vibe to it.

I’m putting a new band together for that and I’m excited to share these songs and the experience of this new music live with my Toronto community and then beyond.

You can find me and all my music on the social media channels, and streaming platforms, and also directly via: www.chrisassaad.com.

Paul: Thank you Chris for taking the time. I am looking forward to listening to your new album, Golden. I’m excited to check out the new band on December 2nd at Annette’s Studio. I hope that Canadian Magazine is on the guest list for that gig.

Chris: For sure Paul. Thanks again for the invitation, brother.

“Listen”, the second single from the GOLDEN album is out now!
Co-written with & Produced by Joby Baker. Featuring Randy Sutin on vibraphone.

An independent journalist, based in Toronto, Canada. A professional musician and a fan of music, dance and the arts. I have written short stories, lyrics, poetry and reviews. I have been published in numerous online webzines. I’ve taught drumming and played in bands; I have felt the passion to create. I enjoy expressing that passion, the artistic experience, in words, reporting on the shows and musical experiences that I have witnessed.