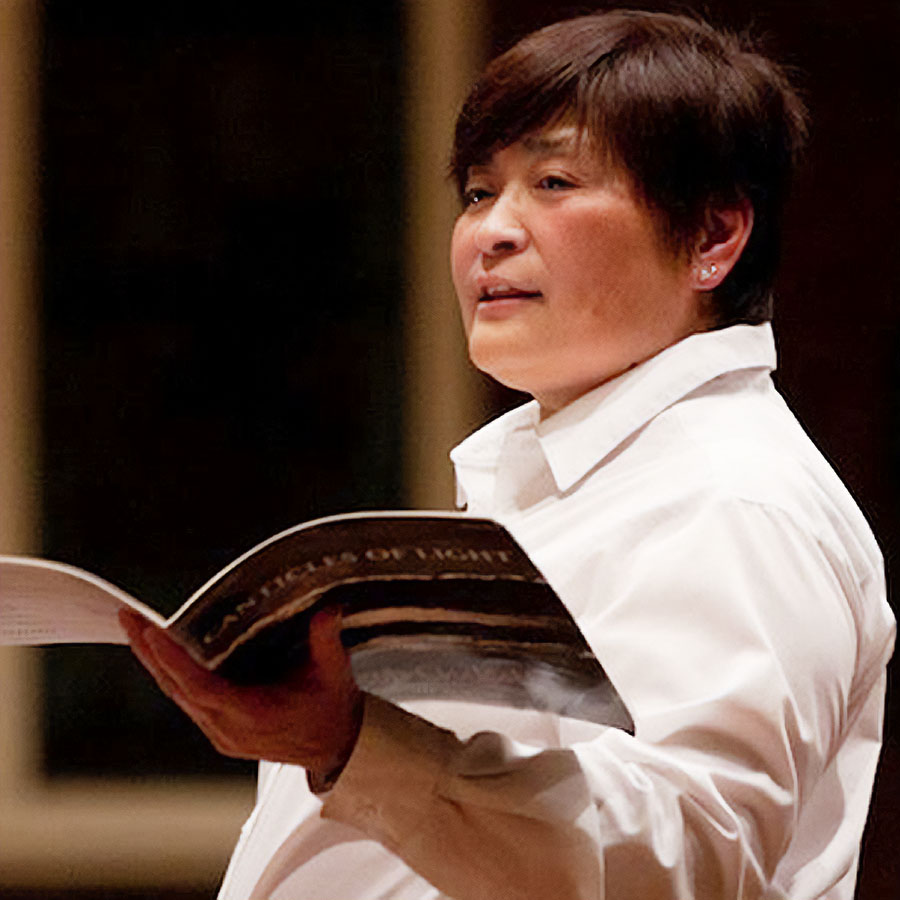 Brenda Uchimaru at University of Toronto

O happy Fate to be overwhelmed by the cultural force that is the Kokoro Singers under the inspired artistic direction of Brenda Uchimaru… O happy surrender to be embraced by the supreme force voices in harmony, swirling in the air of the United Church on West Plains, Burlington, on the afternoon of the 11th of December. For it was then that all fears of having another Christmas stolen from us by the Grinch of COVID-19 were swept away by; surprised by expertly prepared repertoire with which to forget that we were, not long ago, locked away in fear of our very lives. We were, after all at WinterSong 2022…

Brenda Uchimaru may not have the highest profile among artistic directors of ensembles – choral or otherwise. However, she among the most accomplished of that tribe anywhere and her reputation among musicians and cognoscenti is equal to anyone in her sphere of music. Easily one of the busiest artistic directors since she graduated from the University of Toronto with two Bachelors’ Degree[s] in Music Education, Ms Uchimaru has [since] founded several celebrated choral ensembles and is currently the artistic director of two choral ensembles – the Cambridge Male Chorus and, of course, the Kokoro Singers.

The word Kokoro derives from a Japanese word, the essence of which has come to mean the centre of life, the beat of the heart, inner meaning and soul. As a choir, Kokoro’s repertoire spans all genres, but finds most of its expression in compositions that give voice to the emotion within the poetry. Idioms of jazz, folk, gospel and spiritual find their way into each programme. In addition to two annual concerts, the Singers also give back to the community through fundraising events for organizations supported by Kokoro members – one of which is sockscanada.org which was represented on this occasion by Ann Forbeck [a soprano from the Kokoro Singers, driving the SocksCanada initiative].

And so we gathered in hope at the proverbial sanctuary of tiny church with unsurprisingly beautiful acoustics as much to forget the existential economic and social woes which have gripped our very beings. The programme – for Wintersong 2022 – was replete with music aglow with the hopeful warmth and cheer of the coming season of Christmas. It bears mention at the very outset that while the Singers could be a formidable a capella ensemble they soared even higher egged on by a pianist and not-so little drummer boy.

Presently, with minimum fuss, the 21 sopranos, contraltos, tenors and bass/baritones that formed the Kokoro Singers – augmented by the “collaborative pianist” Becky Booker and [on two occasions] the percussionist Steve James – all of whom were shepherded by the gentle, secret swirling gestures by Brenda Uchimaru. We were, quite magically, made to forget that we were actually rooted to the hard – albeit burnished wood – of church-pews, intended, some would say, to keep the faithful awake in the event of a long and meandering Sunday Lesson.

Our faces dappled by sunlight that filtered through stained-glass windows, our sublime comfort was assured by the Singers as they elevated the senses to the rarefied realm. No sooner had the Singers launched into Make We Joy Now In This Fest by Matthew Culloton than we were transported by this choir of proverbial pied pipers. With glorious harmonies charging every particle in the sanctified air we were transported to another world of hope and joy and the eloquent music of WinterSong 2022.

How noble and restrained were the Kokoro Singers from right out of the gates. Yet behind that – inside – was the intense fire of splendid musicianship. The sopranos soared, contraltos and tenors rustled the lyric like raw silk, and the basses and baritones grumbled elegantly as the Singers melded into a marvelous whole, leading the ever-willing faithful through the throes what came to be a musical rapture.

With the sacred not hidden, but gently ensconced in the secular the Singers and Ms Uchimaru beckoned us to the humble crèche in Bethlehem with John Rutter’s timeless Nativity Carol which was followed by the eternal classic Away In A Manger, though not before a timely reminder that the song was composed by the gifted Canadian composer Victor Mio. Not long after, the Advent hymn Good Christian Men Rejoice [sung in English, but adapted from the Latin psalter hymnal in which it is entitled  In Dulchi Jubilo, by the 19th century scholar and musician, J. M. Neale called in to play a marching rhythm, and featured the percussion colourist Steve James.

That [aforementioned] brisk hymn was arranged by the prodigious Darmon Meader of the New York Voices. Mr James returned for another gorgeously performed [Darmon Meader] arrangement of the interminable O Come, O Come Emmanuel, which ended the first section of the programme. However this was not before Ms Uchimaru graciously left the floor to soprano Ann Forbeck, who introduced – and read – little tree a poem by the iconic post e.e. cummings. The Singers then launched into a marvelously florid arrangement of cumming’s poem set to music by Steve Herzog.

The two enthralling sets were separated quite suddenly by a caroling insert featuring all of us in the audience who were bold enough to raise our voices in song. We were, of course, guided by Ms Uchimaru and a stripped down iteration of the Kokoro Singers. Bracing ourselves, we sang heartily: Joy to the World was followed by The First Nowell.

The audience’s star turn was brought to a close with a rousing rendition of Good King Wenceslas. The timeless carol told the story of the life of Saint Wenceslaus I, Duke of Bohemia [907–935] who embarked on a journey, braving harsh winter weather, to give alms to a poor peasant on the feast of St. Stephen [the 26th of December, the Second Day of Christmas]. It was a thrill to play, variously, a group of poor peasants who were waiting to benefit from King Wenceslas, we also sang the role of the king, as well as the king’s page who was about to give up the struggle against the cold weather, but was inspired to continue the mission by following the king’s footprints, through the deep snow.

Ms Uchimaru then handed the stage to the bass-baritone, Luke Fillion, who introduced the audience to the opening song of the second set. Sing Gently was brought to life in the flesh, so to speak by the Kokoro Singers. The chorale was composed by the much-talked about Eric Whitacre and performed by a monumental Virtual Choir, which also featured Mr Fillion, together with 17251 other singers from 129 countries. Check out that performance below. It bears mention that the choral evensong was magically interpreted by the Singers in their smaller-ensemble version.

The second set had a more contemporary and somewhat jazzy groove with such evocative pieces as One Song from the indelible pens of Alan and Marilyn Bergman, and Marvin Hamlisch, arranged by Mark Hayes. The wonderfully raucous bit refers to the drinking song Wassail, which featured challenging changes in time-signature, not to mention a motoring rhythm throughout.

This choral recital was memorable as much for what was in the repertoire as it was for what wasn’t. We are, indeed, in Christmastime and it is always a joy to listen to – even to attend [again and again] one of two traditional events: and by that one refers to Nutcracker Suite by Tchaikovsky and/or Handel’s Messiah [this great oratorio is much more than the Hallelujah Chorus, one may add]. While both are, indeed edifying experiences [revisited again and again, no less], it is also heartening therefore to find choral artistry outside of the tried and tested [albeit wonderful] Voces8 and others.

Brenda Uchimaru’s Kokoro Singers ought to be better-known and appreciated – concerts like this one stand out from among the crowded fare at this time of year. The Kokoro Singers presented a breathtakingly evocative recital with Brenda Uchimaru calling to mind the legendary Ward Swingle and [the Singers], his iconic group The Swingle Singers… WinterSong 2022 also helped one discover the prodigiously gifted pianist Becky Booker, who played a stellar role in the unforgettable evening, and Steve James, who may otherwise be seen and heard performing with city jazz ensembles. Above all it was heartening to listen to the Kokoro Singers and speak with their artistic director Brenda Uchimaru – all of whom truly embody heart and spirit not only of music, but of everything that is edifying about Humanity itself.