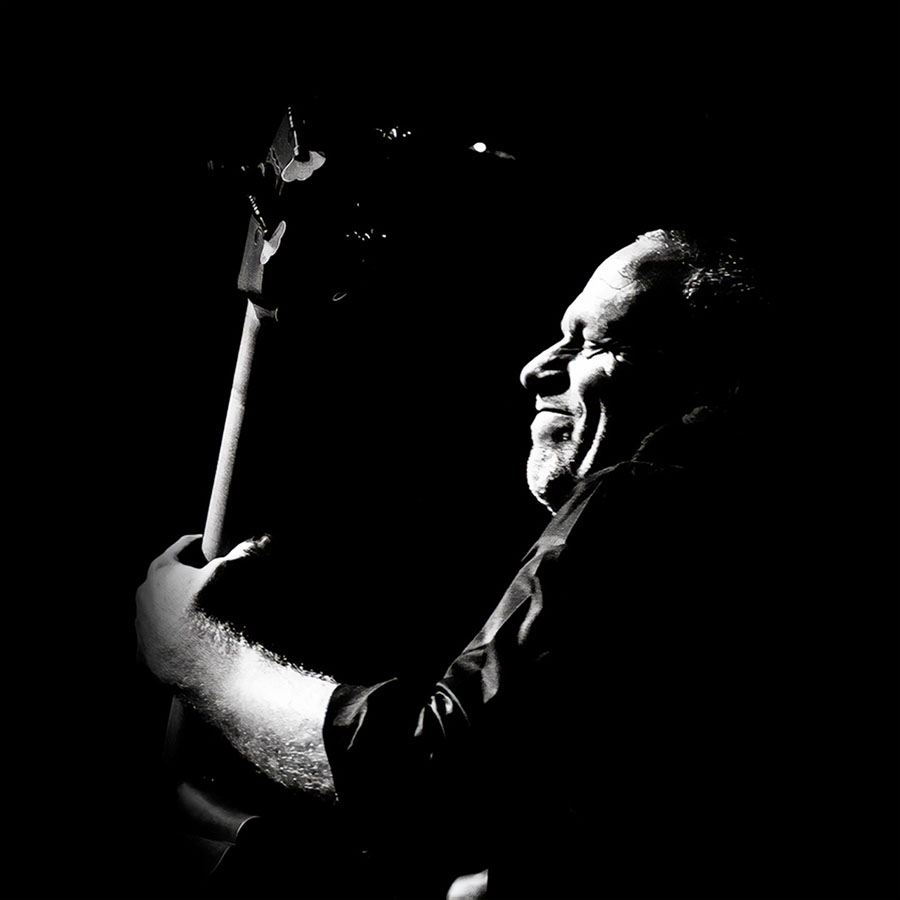 Trust Chick Corea to have associated only with the finest musical partners throughout his long and illustrious career – from when he was still exploring avenues in music, before he came to a radical definition of his musical voice until the very end of his life, when he became a celebrated leader. So it should come as no surprise that he once hosted the extraordinary musician Avishai Cohen, the contrabassist charged with roaming the deepest recesses rhythm. But Mr Cohen did much more in return; he brought uncommon gravitas to Mr Corea’s music. He did this by sculpting the eloquent bass line melodies for the master’s acoustic trio.

Everything seemed to come easily to Mr Cohen. If he was stretched you would never realise it. The reason for this is simple: Mr Cohen brought an almost insolent virtuosity to the contrabass – an instrument he has excelled at like few of his musical contemporaries. There is much in Mr Cohen’s music to also believe that he is a composer like no other. Born to a musical family, we are told, in the Kabri kibbutz of Northern Israel and this might have typecast him as “Israeli”. Yet his cultural topography is pan-Middle Eastern, Spanish, Greek and Polish [if not a much more colourful collision of cultures].

And so if we are to define Mr Cohen’s colourful life, his cultural purview, his wide interests, his wanderlust, we find a world-view that is Jewish-Yemenite-Sephardi-European-American and much more. However if one tries to place his musical voice geographically, we will almost certainly run into difficulties. Indeed, one of the defining characteristics of that musical voice is the very dynamism that drives this cultural collision – almost making Avishai Cohen a musical nation-state all his own.

Listening to his last two recordings – Two Roses and Shifting Sands – Mr Cohen’s music almost “fails” to fall happily into any so-called Israeli nationalist musicianship like that of Idan Raichel, for instance. Mr Cohen’s eclecticism, his receptiveness to a wide range of cultures, and the very resistance his musical style demonstrates towards established models and stereotypes [and this includes his maverick approach to musical syntax, form and tonality] that actually makes him such an elusive figure.

At the same time his is a highly individual harmonic language, derived from the dynamic [and diametrically opposed] Yemenite and Sephardi traditions, yet overlaid by the Jazz influences [of, say Jimmy Blanton, Charles Mingus and Ray Brown] melded with classical music [certainly in his playing con arco and his majestic pizzicato too, which leads one to recall the playing of François Rabbath or Joel Quarrington for instance].

In the sum of his parts Mr Cohen – player and composer – is unlike any other [contrabass-playing composer and musician], and is conspicuously personal and immediately recognisable to the ear. And yet it is this very aspect of Mr Cohen’s genius that may engender extreme polarities of opinion, attracting followers of immense fervour and devotion [a group to which one belongs], to possible detractors who feel listless in their lack of love for his music. Truth be told, the music of Avishai Cohen for some exudes an irresistible perfume and has the power to evoke a sense of deep nostalgia and longing.

For others there will always be a profound association with landscape and nature Mr Cohen’s music may have a beguiling, often pastoral aspect – one that sought to illustrate the dry and sandy – or lush green, depending on which part of the Middle East he may be evoking –this is only one side of a much broader personality which has embraced the music of his ancestors, the music off Black Americans, the poets and troubadours of Spain and Yemen, with the intensity of a proverbial Dervish engaged in the dizzying dance of life.

The two recordings under review also represent Mr Cohen at his best, his music reveling in the performance of a lush orchestral setting [the Gothenberg Symphony Orchestra, conducted by Alexander Hanson] plus the master’s trio. The second recording features Mr Cohen with his most recent trio, heard in an altogether intimate setting. Both recordings feature one undeniably unique aspect of the composer’s work: music of emotional range and vibrancy which in the case of both recordings unveils a spectrum of feeling matched by symphony orchestra and the trios of individual musicians.

Avishai Cohen: Two Roses – The fragrant music of this recording is rooted in the rugged landscape of the Middle East. Yet it is a metaphor for two worlds that collide and coexist in Mr Cohen’s world-view; the proverbially ancient traditional and the utterly modern; coexisting in the small ensemble [featuring pianist Elchin Shirinov and drummer Mark Guiliana] and the mighty Gothenberg Symphony Orchestra, conducted by Alexander Hanson.

The album comprises repertoire comprising a range of original work together with two classics – Eden Ahbenz’s “Nature Boy” and Thad Jones’ great work, “A Child is Born”. This is a pastiche of traditional [even – in a sense – romantic] music, but it is so much more than romantic music in a modern dress. It is 21st century expressions of music which relies completely on the psychological overtones of sonorities and harmonies which may have come into being with traditional [folkloric] troubadour music. Mr Cohen has refurbished the melodies, elongated their narratives with elaborately ornamented harmonies and dallied or speeded up the tempi – depending on the emotions he wished the orchestra to elicit from the listener.

The result is that we have a fabulous work of art in every sense of the word. Of sublime little songs enlarged to epic scale – the stuff of myths – performed to perfection by the Gothenberg Symphony Orchestra. The Byronic narratives are graphically portrayed under the baton of Alexander Hanson. Moreover, Mr Cohen’s contrabass, warm of tone and expressively malleable as it is in his expert hands, cuts a dash as the music’s Romantic hero.

He emerges as the proverbial, swashbuckling Paganini for whom Mordechai Ze’ira and Ya’Akov Orland’s “Two Roses” could easily have been especially composed. So personal is the interpretation here that it would seem Mr Cohen has completely penetrated the secrets of the song, which now speaks to him in the silence of his heart. This is an absolutely magical performance – a once in a lifetime musical experience beautifully captured on record.

Avishai Cohen Trio: Shifting Sands Every once and a while a recording comes along that is so spectacular that you may want to unabashedly dance to  the music in the street, perhaps even handing out copies of it if you could – certainly recommending it to anyone who wonders why you are dancing so ecstatically. This is new music performed in Avishai’s most preferred – intimate – setting of the trio. Following his orchestral immersion Mr Cohen crafts this new music also for a newly formed trio – one of the finest he has ever put together [the one with pianist Nitai Hershkovits notwithstanding].

Time and again, you may have marveled at the virtuosity, the confidence and sureness of Mr Cohen’s playing, combined with the finesse and musicality that he has always displayed. Although you think fleetingly of the great masters of his instrument – Jimmy Blanton, Charles Mingus, Oscar Pettiford, Ray Brown and Scott LaFaro – this is the kind of recorded performance where comparisons cease to matter. But that might also be to shirk one’s reviewerly duty because, in fact, Mr Cohen’s performance puts him smack-dab into that great musical continuum that includes those ancestors.

Balancing the sheer colour and variety – and nuance – of Mr Cohen’s playing, not least in “Intertwined”, the musicians are coaxed into the twisting, downward spiraling bass line melody quoted by the pianist Elchin Shirinov’s left hand entwined like a double-helix, with Mr Cohen’s pizzicato lines. The pianist’s vividly evocative right hand forms another skein drawing in drummer Roni Kaspi into the web of a musical melee. Elsewhere Phrygian modes and shimmering desert motifs adorn the languid loping lines of “Dvash”, which develop in elliptical arcs to the rhythmic pulse of a caravan in the desert.

The bowed intro of “Cha Cha” is absolutely magical. The melodic lines are evocative of Mr Cohen’s cultural topography, traversing the music of Sephardi, folkloric Yemenite, Judeo-Greek-Turkish and North African modes. Furthermore, on “Hitragut” Mr Cohen delivers one of the most lyrical serenades through the strophic verses, sculpting the words of Psalm 147 into each line, as he – together with the idiomatic performances of the other members of his trio – make the musical notes leap off the page. This disc is, quite simply, one to die for.