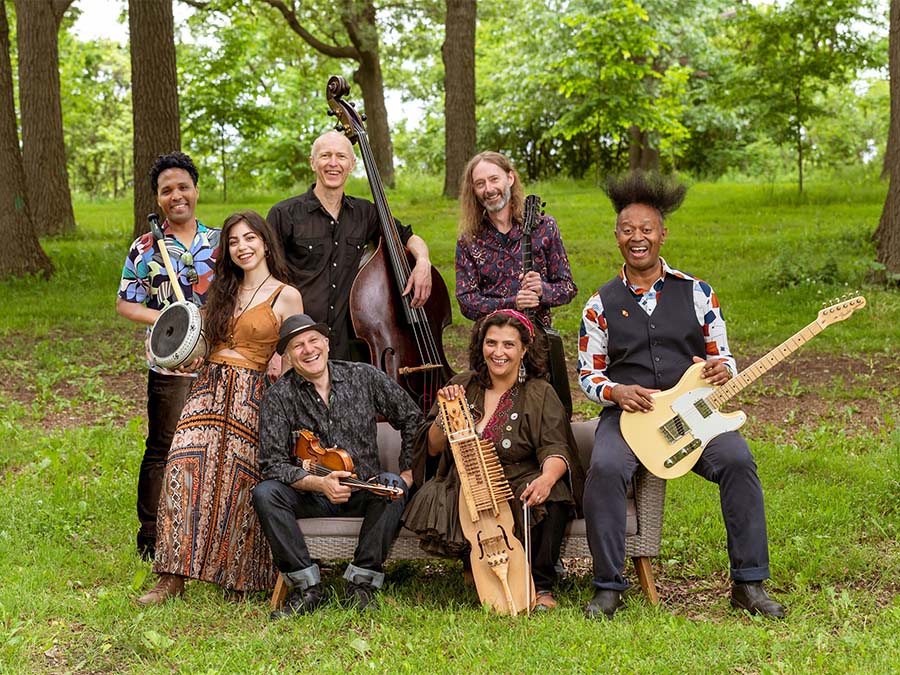 The Toronto live CD Release show is part of the Canadian Arab Orchestra’s “Festival of Arabic Music & Arts” , featuring the core Sultans of String (Chris McKhool – violin, Kevin Laliberté – guitar, Drew Birston – bass), as well as many of the special guests from their new album, including singer Leen Hamo and clarinet player Majd Sekkar, both of whom came to Canada as refugees from Syria.

Sanctuary is the second instalment in their groundbreaking visionary Refuge Project. The first, simply entitled Refuge, was heralded as “a fantastic, moving, dreamlike, epic, timely album.” – Ken Micallef (Jazz Times, Stereophile, Downbeat) and won many awards including Producer of the Year at the 2021 Canadian Folk Music Awards for bandleader and violinist Chris McKhool.

This ambitious, diverse, inclusive, and passionately political concept album puts the band face-to-face with a VIP roster of global ambassadors for peace, many of whom are recent immigrants and refugees to Canada, as well as important Indigenous voices.  On Sanctuary, Sultans of String bring their unique brand of musical synergy and collaboration to bear on eleven songs that speak to the challenges facing the world’s displaced peoples—their stories, their songs, their persistence and their humanity.

Creating this collection of songs from the global diaspora is personal for bandleader/violinist and Queen’s Diamond Jubilee Medal recipient, McKhool. “My family name would have been pronounced Makhoul back in Lebanon, but when my grandfather arrived in 1903, as a stowaway on a ship, he probably encountered a Scottish border guard that thought it would be nice to give the spelling a Scottish flair, hence the oddball spelling for a Lebanese name,”  McKhool explains. “These first Lebanese to Canada and the U.S. came with no money in their pockets, but with a tremendous drive to succeed. My grandparents saved up and opened a restaurant in Ottawa called the Laurier Tea Room, which did booming business after the war. The song from this project, Hurricane, is an ode to so many who came to the New World planning to work hard and save up enough to bring their loved ones over.”

These songs were created in collaboration with artists hailing from countries across the globe, each with a story to share about their journey to freedom, whether it be via words or music. Each story is more compelling than the last, with some exploring the turmoil they fled, while others gazing forward at the possibility that their new home represents.

For example, singing siblings Ahmed and Tara Moneka from Iraq revisit and give a new, darker feel to the Sonny Bono-penned Bang Bang (My Baby Shot Me Down) made famous through versions by both Cher and Nancy Sinatra. Ahmed himself came under threat for portraying homosexuality in a film that gained popularity after screening at the Toronto International Film Festival (TIFF). While at TIFF, extremists visited his family in Iraq and warned that they were planning to kill him if he returned home. Ahmed’s sister Tara soon faced similar threats for playing music that offended those same extremists. Ultimately the Moneka siblings both found refuge in Canada.

Another standout Sanctuary song, Mi Santuario, could be taken as a de facto title track, written by Juan Carlos Medrano (Colombia), capturing the paradox of many displaced people. “It’s about that feeling of missing home but also the fear of returning to a place where dissidents and the marginalized go missing”.

One of the singers on Sanctuary, Yukiko Tsutsui says “We need this uplifting music … a gift for people from all over the world to get to sing together and play together. It is so moving. Music and love have no borders.”

Other new Canadians joining this special performance are Padideh Ahrarnejad on Persian tar, Naghmeh Farahmand from Iran playing percussion, Donné Roberts (African Guitar Summit), originally from Madagascar singing in Malagasy, and Saskia Tomkins performing on a rare string instrument from Sweden called the nyckelharpa. Tamar Ilana will be singing in Spanish and performing flamenco dance. Joining virtually will be Turkish string group Gundem Yayli Grubu and others, in a spectacular integration of sound and light.

“We learn so much from these diverse voices and stories”, says McKhool. “Each speaks to the kind of complexity and beauty one can achieve by coming together in creativity while shedding light on one of the most urgent issues facing the globe.”